When things go sour between you and your housemate, you may find yourself wondering, “Can I evict them?” If you’ve tried chatting it out and compromising and it ain’t working, eviction may be your next step. 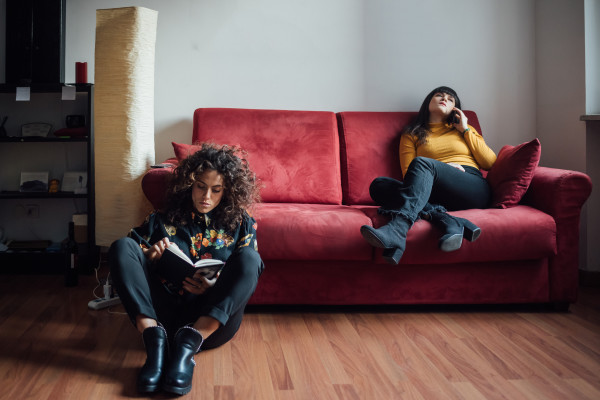 It’s no wonder there’s confusion around the issue. Many share houses have no standard contract in place (if yours doesn’t yet, try using our Flatmate Agreement template). So if things aren’t working out between you and your flatmate and you feel you have a stronger claim on the place, you may start thinking about eviction.

Here’s a step-by-step guide to having a problem and having a flatmate move out with minimum fuss.

How to evict a housemate

For what can seem a thorny issue, it’s good to know that the path to having your problem flatmate leave will, in many cases, be straightforward. Make the problem clear in a conversation with your flatmate and explain why you want them to leave. Most will only be too happy to go: few of us want to stay where we’re not wanted and there are plenty of share houses out there.

That said, in some cases, things can — and will — be more difficult. Here’s what you need to know before you begin.

Know where you stand

It’s important to know what you can and can’t evict a flatmate for and under what circumstances.

If both you and your flatmate are on the lease, you may not be able to have them move out, as you’ll both have equal rights to live in the property. If they’re on the lease and you’re not, it’s probably easier for you to move. And if you’re on the lease and they’re not, but you have a written agreement for their sub-letting from you, you’ll need to give written notice under the law — 90 days’ notice in most states, but more in certain places.

Also keep in mind that simply “not liking” a flatmate — what’s called “personal differences” — is not usually grounds for evicting someone. There will need to be some problematic action or behaviour on their part, like not paying rent or bills, or not keeping the place clean.

And if you’re up for some more detailed reading, we’ve linked to all Australian states’ Tenancy Acts.

A household meeting with all your flatmates is the first step in evicting someone. In fact, this conversation may end up with you finding a compromise that you can all live with, under the one roof. In that case, well done and happy days!

But if not, use this conversation as an opportunity to: Explain the problem you have with the person, or that you feel they are causing. Make sure they understand how they can resolve it and stay on, if that’s an option.

Gain their agreement that the living arrangement needs to end, and a commitment for when they’ll move out (leaving a reasonable window of time for them to do so).

To achieve these goals, try to keep the conversation as unemotional and impersonal as possible. You don’t want your flatmate to feel like this is a personal attack, since that will likely increase the emotional intensity of the meeting and might perhaps lead to more problems. So, have a think about what you’ll say, and what you won’t, before the discussion begins.

Having a frank and rational conversation about your flatmate moving out is hard. What happens if your flatmate gets angry, and refuses to move out?

Mediation happens. Google your local community justice centre and give them a call: many offer unbiased dispute mediation services that can help you to resolve sticky situations just like this. Also, check the links above for your state to find out what mediation options are available near you.

Issue a Notice to Vacate

Whether or not your conversation with the flatmate you’re evicting was smooth or bumpy, once you’ve talked and, if necessary, sought mediation for any problems, the next step is to issue a formal Notice to Vacate — so long as that person is on the lease.

Again, check the sites above to find out what form the Notice to Vacate must be in, and what, if any, specific wording it must contain. Also, make sure you’re clear about how much notice you’re required to give your flatmate under the law, as this, too, varies by state.

What if your flatmate isn’t on the lease? It’s probably still a good idea to give them written notice to vacate. Having something in writing will be useful down the track if there are any issues with them actually leaving the property. But that also applies to a written tenancy agreement: unfortunately, it can be a challenge legally to evict someone who is not on a written agreement. Speak to your local legal aid service if you have any concerns.

Get a Termination Order

If your flatmate doesn’t vacate the premises by the agreed date on your Notice to Vacate, you’ll likely need to take the matter to your state’s Civil and Administrative Tribunal (or equivalent). Be aware that you’ll need to convince the tribunal that the eviction is warranted before they’ll need to issue the Termination Order. Depending on the tenancy circumstances and your local laws, that Termination Order may take weeks to come into effect.

Finally, if that doesn’t lever the flatmate from the property, you can go back to the Tribunal and apply for their forceful eviction by local authorities.

What not to do

Throughout this process, there are a number of things you’ll definitely want to avoid.

Don’t argue or fight with your flatmate: As we said above, heightened emotions are more likely to lead to irrational behaviour and a generally unpleasant living situation for everyone involved.
Don’t get personal: If you can, try to keep the reasons for the eviction clear and as impersonal as possible. Don’t criticise your flatmate or their personality; stick to rational facts about behaviour, and explain the impact of it on the rest of the household so they’re clear about the reasons for the eviction.
Don’t throw someone out bodily: Forcing a flatmate physically to leave your house is against the law, and throwing their stuff out onto the nature strip is a bad idea too. If you experience illegal or unsafe behaviour from a flatmate, call the police.
Don’t forget to track dates and events relating to the issue: If you want to evict someone, you’ll need grounds to do so. A one-off event might not be sufficient. So it’s a good idea to keep a written record of whatever the problem is, and then every step you take to either remediate or terminate the situation. This way, if the matter does end up at your state’s tribunal, you’ll have a paper trail with which to support your position.

Lastly, if your flatmate is just getting on your nerves, it might be worth taking a look at our guide on how to deal with annoying flatmates. It’s a little less severe than eviction if you’re just annoyed that they don’t replace the loo roll.

How to negotiate cheaper rent

5 ways to divide the electricity bill between roommates

Australia's cheapest uni suburbs (and the most spenny ones)

5 tips on how to make your share house environmentally friendly